The Guardians Must Realize The Wiener Threat

People and fur people who are Disciples of The Leader Otis,

This morning I decided to head to our Outdoor Domain to see if I could detect any suspicious wiener dog activity going on in or around our backyard. When I arrived at the Outdoor Domain I could not believe what I saw. The Guardians had added a whole new level to the observation deck! Brother Henry was sitting on this new level surveying his surroundings. 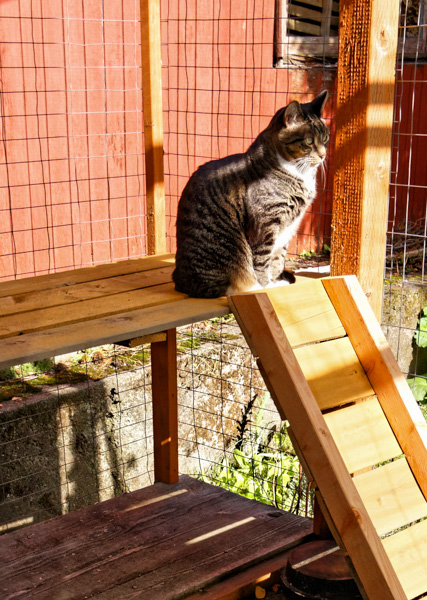 The Guardians had added a new level to our observation deck! Brother Henry was sitting on it!

END_OF_DOCUMENT_TOKEN_TO_BE_REPLACED

Charlie Gets Bolder In Cookie’s Absence

During the week or two that Cookie has been absent, I have noticed a change in Charlie from across the street. With the exception of one peaceful moment witnessed by Brother Oliver, Charlie used to always be on edge when he came into our yard. Since Cookie left though, it’s like he’s a whole new cat.

Charlie has changed in Cookie’s absence.

END_OF_DOCUMENT_TOKEN_TO_BE_REPLACED

Pat The Cat Is Missing

The Guardians have found yet another lost cat poster during their travels through the neighborhood. This time the missing kitty is named Pat the Cat, and he has not been seen by his people since August 5.

Pat the Cat is missing. We purr he is someplace safe.

These posters are always sad, but I hope that they are also motivation for cat guardians to become true Guardians. A true Guardian always keeps his or her kitty safely confined. This does not mean that kitty needs to be locked up in the house never to see the light of day. It just means that the kitty should always be provided with safe boundaries, be they the walls of an outdoor enclosure, a harness and leash, or a yard with kitty-proof fencing.

A Rare And Beautiful Sight

The other day the smaller Guardian took a walk, and when she came back she was showing a photo that she had taken to the bigger Guardian. They were both happy and smiling, so I really wanted to see what was in the photo. I climbed up on the cat tree behind them so I could see over their shoulders, and when I saw the photo I wasn’t quite sure what the big deal was. At first it just looked like a photo of a house, but when I looked closer I saw what they were smiling about. I started smiling too. Stanley was sitting in the front window of the house, and for once he was safe and sound on the correct side of the glass. 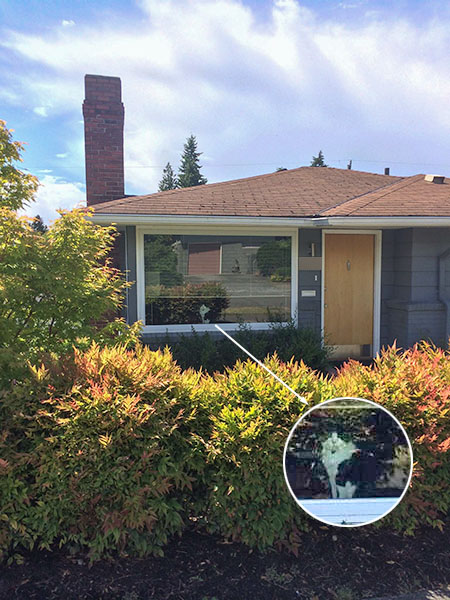 At first it just looked like a house, but then I saw Stanley in the window.

I know that Stanley will probably be outside again… maybe he was soon after this photo was taken. Still, it was nice to see that, at least for a moment, he was safely confined, enjoying a view of the world from a spot where cars, wild animals, mean people, and a million other dangers could not reach him. It was a rare and beautiful sight.

Brother Oliver here. This morning I woke up feeling all excited about spending the day in our Outdoor Domain. I rushed to the back door to find that it was closed, so I did what I always do. I meowed at the top of my lungs until one of the Guardians came and opened the door for me. As the door swung open, I was appalled by what I saw! 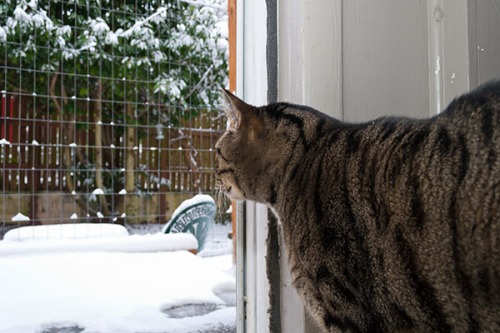 I was appalled by what I saw outside the door!

Snow! There was snow outside! How was I supposed to enjoy myself in that? The Guardian who had opened the door said, “What, Oliver? I thought you wanted to go outside…” I have to admit, I felt a little embarrassed, so I made an effort to show the Guardian that I wasn’t meowing my head off for no reason. I bravely ventured forth into that arctic wasteland… well… I took one step into that arctic wasteland anyway. Then I turned around and went back inside.

See, I really did want to go outside. I took one whole step out the door.

So now my whole day has been disrupted. If I can’t nap all day in the Outdoor Domain, I guess I will have to find another place to nap all day. This is simply unacceptable.

This snow is hugely inconvenient. I will have to find another place to nap all day.

In The New Year, Some Things Remain The Same

Brother Oliver here. I would have loved to start off 2014 with an announcement that all cat Guardians in the world have come to the light and are now keeping their kitties safely confined. I would have also loved to say that all telephone poles in our neighborhood are now completely bereft of missing cat posters as a result. But that would not be true.

As the Guardians took a post New Year’s walk in the neighborhood, they discovered that some things remain the same. They first encountered a poster featuring a lost soul named Pippi. This handsome, 13-year-old tuxedo kitty is currently missing.

Pippi is missing. I purr that he is found safe and sound.

As they continued their walk, the Guardians also found a poster heralding the disappearance of Fritz. Fritz has been lost since Christmas Eve.

Fritz is missing. I purr that he is someplace safe.

So the cycle of kitties not being given the safe boundaries they need, and those kitties disappearing, continues. But wait. Maybe I am wrong. Both of these kitties actually went missing at the end of 2013, right? Perhaps they are the last two lost cat posters of 2013 instead of the first two of 2014! Maybe people really have changed and once these posters weather away no more will go up! I like that idea. I am going to choose to believe that until I see evidence to the contrary.

I hope you will all help me hold on to this belief by doing your part to keep your kitties safely confined and encouraging your friends and neighbors to do the same. Let’s make 2014 the year that lost cat posters are the only things that are disappearing.

Brother Oliver here. Yesterday, I walked into the living room to find Mama Cat sitting on the cat tree in the front window. She was looking out toward the yard, and I don’t think she knew I was there. She was talking softly, and as I moved closer, I could hear what she was saying. Mama Cat said, “You’re OK now. It’s over. It’s really over. They see you. They hear you. They love you. They will protect you. You are no longer alone. You’re safe. Just let the fear go…” I wondered to whom she was speaking.

Mama Cat was looking out into the yard and talking, but to whom I couldn’t see.

END_OF_DOCUMENT_TOKEN_TO_BE_REPLACED

A poster discovered by the Guardians of Otis on a recent walk announced that Pasanda has gone missing.  It did not say much about him other than that, but judging from his photo he seems to be a young kitten. 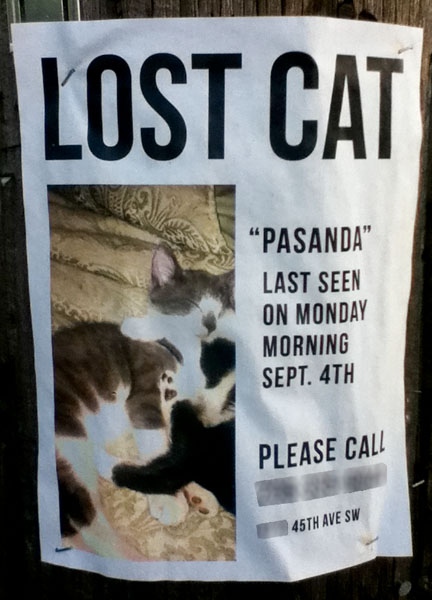 Pasanda is missing. I purr that he has been found by someone who will keep him safe.

It saddens Me greatly to see yet another one of My Feline brothers join the ranks of the lost.  Please purr with Me that Pasanda and other lost kitties will be found by caring people who will give them the lives, along with safe boundaries, that they deserve.

Two More Kitties Enter the Ranks of the Lost

It never seems to end.  The Guardians were out walking in the neighborhood again and they noticed two more missing cat posters had gone up.  The first was for a well-loved cat named Milo that apparently meows very loudly.  He has been missing since April 3. 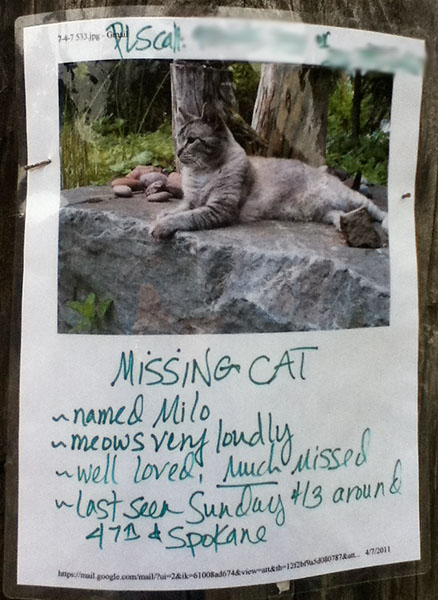 Milo has gone missing. I purr that he is found.

The second poster looked like it had been up for some time.  it was badly weathered and no name for the kitty was given.

I purr that this kitty is found and that she has not faded from memory like this poster.

It seems like every day more and more kitties are added to the legions of the lost.  Every poster that goes up tells a story of loss, both for the kitties and their guardians, and every one serves as a reminder of the importance of keeping kitties safely contained.  I wish with all My heart that these two lost cat posters will be the last that are ever needed, but as I look out the window and see all of the other kitties wandering free without safe boundaries, I know that more posters are coming.

I have terrible news.  In the past week the Guardians have discovered that two more kitties in our neighborhood have gone missing.  As they were out for a walk on Monday they learned that Charlie was lost and scared. 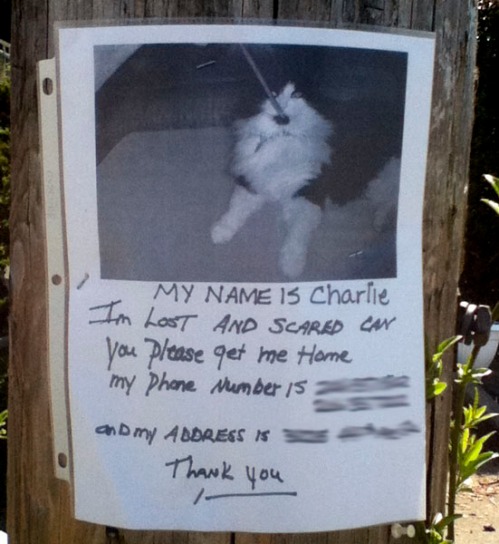 On Monday, the Guardians found this poster announcing that Charlie was lost and scared.

Just yesterday, another poster was spotted that said a petite, female tuxedo kitty was also lost.  The poster had been smeared by the rain though so I don’t know what this poor kitty’s name was. 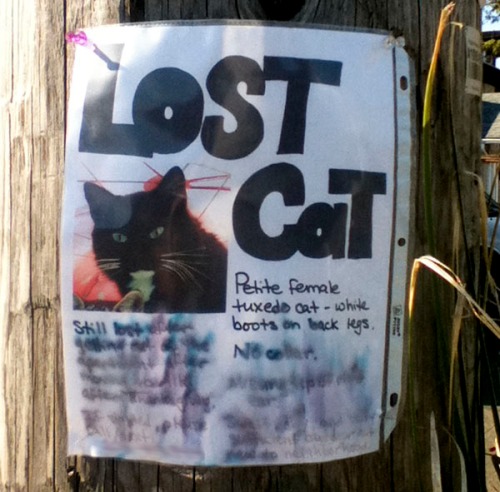 I don't know her name, but this poor kitty is lost too.

I am very discouraged that despite all My efforts to teach humans to keep their kitties safe and contained, many cats are still going missing.  I hope you will join me in purring that these two lost cats are still OK, and that they will find their way home soon.  I also continue to purr that you will do everything in your power to ensure that your own kitties are kept safe so they will never end up on a lost cat poster of their own.