The Cult of Otis Lives!

Brother Henry here. We are all still processing our painful loss, but we are beginning to heal. I want you to know that, although Leader Otis is no longer with us in the fur and flesh, the movement he started continues. The Cult of Otis lives! 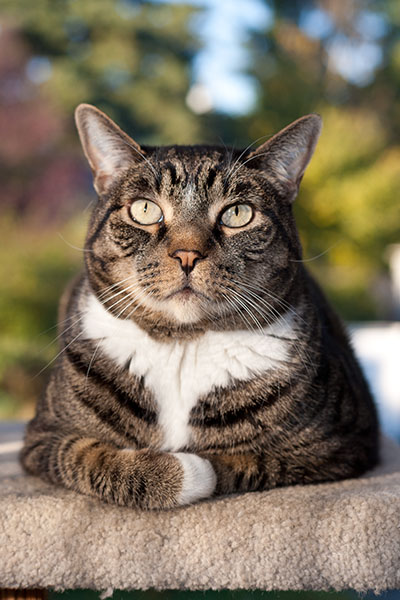 The Cult of Otis lives!

END_OF_DOCUMENT_TOKEN_TO_BE_REPLACED

Brother Oliver here. On Monday, October 28, just after 3 pm Pacific time, Leader Otis was laying in a comfortable bed on the couch. Sun was streaming in through the windows, and rainbow shinies cast by a crystal in the window danced all around the room. One Guardian sat on the couch next to Leader Otis, and the other sat on a chair facing the couch. They held hands, stroked The Leader’s fur, and gave Him gentle kisses on the head. One of the kind doctors that had helped Leader Otis throughout His long illness sat on a chair facing Him, and his assistant sat on the opposite side of Leader Otis from the Guardians.

After having said their goodbyes earlier, Brother Henry, Mama Cat, and Thomas had left the room. Only I remained. I sat between the Guardians and looked upon the face of The Leader for the last time as the doctor performed the compassionate act. The transition was so swift and so gentle it was nearly undetectable. With one last kiss on the forehead, and a whispered goodbye from the Guardians, Leader Otis let go. Bathed in sunlight He departed this world, surrounded by the love and gratitude of those fortunate enough to have shared His life. 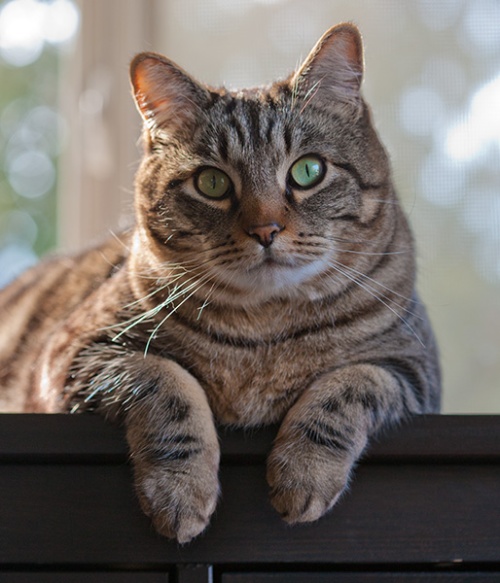 Leader Otis departed while bathed in sunlight and surrounded by love.

A few days before His passing, Leader Otis entrusted Me with His final message. Just writing it down has proven to be one of the most difficult things I have ever had to do, but I will relay it to you soon. For now, I just want you to know that all of us here at The Cult of Otis cannot thank you enough for your kindness and support during this most difficult time. We have read every one of your comments and have received great comfort from them. We feel the love, and we return it to you with all of our feline and human hearts.

We Need A Little Time

Brother Oliver here. For over 1,000 days, without interruption, we have brought you glimpses into our lives, interwoven with lessons from The Leader and examples of how to live in accordance with His Word. But now an interruption is necessary. We are all hurting, our feline and human hearts heavy with the knowledge of what must happen next. We are doing our best to take care of one another. 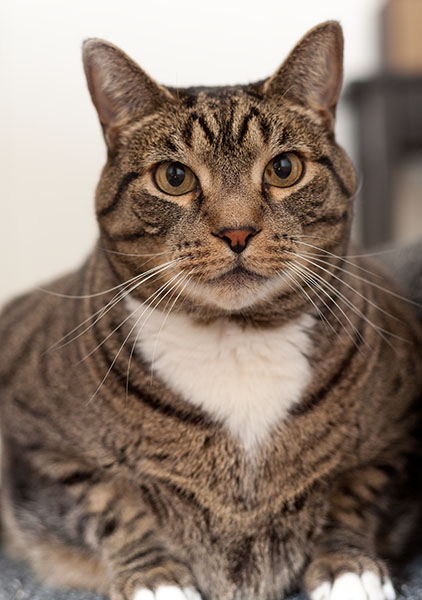 We are all hurting, but we are taking care of one another. 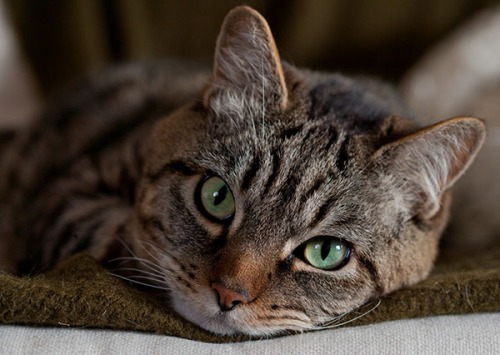 We must now focus all of our love and attention on Leader Otis, but you are in our thoughts as well.

Thank you all for your support during this difficult time. The Leader loves you all.

The Fifth Commandment of Otis

Today I bring you My fifth commandment.  In some circles this commandment is considered controversial.  But after wandering alone in the wilderness Myself, and seeing the fate of so many other cats that did the same, I am strongly convinced that this is an important commandment to follow to ensure that we are protecting kitties from undue suffering.  The fifth commandment is:

TNR is short for “Trap, Neuter, Return.”  It is the practice of capturing feral cats, surgically sterilizing them and then returning them to where they were found.  In most cases the cats also have a portion of their ear cut off so that they will be identifiable in the future, and feeding stations are often maintained in areas where the cats are living.  The practice is intended to reduce the number of feral and free-roaming cats by reducing their reproductive capacity, but it neglects to address the suffering that these animals experience while in an unprotected, free-living state. 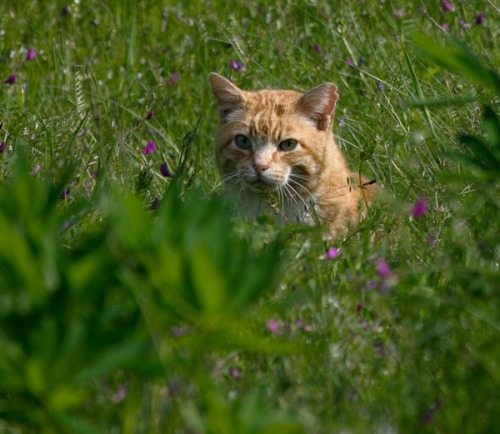 This presumably feral cat was spotted in Seattle's Discovery Park. His left ear is notched, indicating that he was part of a TNR program.

The wild world is no place for a domestic cat, whether feral or tame.  Fear and suffering is all that world has to offer.  Humans should strive to end the unnecessary suffering of domestic cats whenever and wherever they are able.  Please do not let feral cats that you encounter continue to wander alone in the shadows, and if you capture them, please do not make them undergo surgery and then cast them back into the shadows to continue their suffering.  If possible, let them live out their lives in the safe confines of an enclosure.  If that is not possible, please give them gift of a humane release from their suffering through euthanasia.

Today I bring you the true face of Saint Spot, Patron Saint of the Compassionate Act for the Cult of Otis.  May his story bring comfort and strength to all who wish to help end the silent suffering of My feline brothers and sisters that are lost in the shadows.

Spread his image so that others may learn of his story and message.

Spot was a young, unaltered tom that was likely a second or third generation feral. He was completely terrified of people but could not survive without the food that they offered. If left completely to his own devices he likely would have died of starvation, disease, being hit by a car or some other very unpleasant event. If he had been trapped, neutered and returned he would have had to suffer the terror of capture, the fear associated with being in an unfamiliar, human-dominated environment, the trauma and disorientation of being anesthetized, the confusion of waking up with post-surgery pain, and the shock of being released back out into the world before his surgery site had even healed. Once again abandoned in a world with no protection he would have then suffered the same fate (death by disease, starvation, being hit by a car, or other) that he would have before all of this was done to him. His ability to reproduce would have been eliminated, but his ability to suffer the pain and anguish of his shadowy existence would have still been intact. This was not to be his fate. Spot was captured, taken to a shelter and humanely euthanized. Both his reproductive potential and his potential for suffering were eliminated by a compassionate act.

Saint Spot reminds those that are working to end the tragedy of feral cats that humane euthanasia really is a compassionate course of action for these suffering souls. While we may be able to rationalize releasing cats by saying things like, “anything is better than death…,” this is not necessarily true. All cats will eventually die. Feral cats will most likely die a prolonged or gruesome death that we would never wish on any animal. If they have been trapped, altered and returned, they will likely not go into a trap again. This means that if they are seen to be suffering at some point in the future, you will not have the opportunity to make sure that the suffering does not go on any longer than it has to. But more likely than not, you won’t see their suffering. Like most ferals, they will die alone. If you make the compassionate choice when the animal is first captured, you can ensure that their life ends with dignity, and without prolonged suffering. Saint Spot attempts to give people the strength to make that compassionate, selfless choice in spite of the emotional pain they may feel as a result. 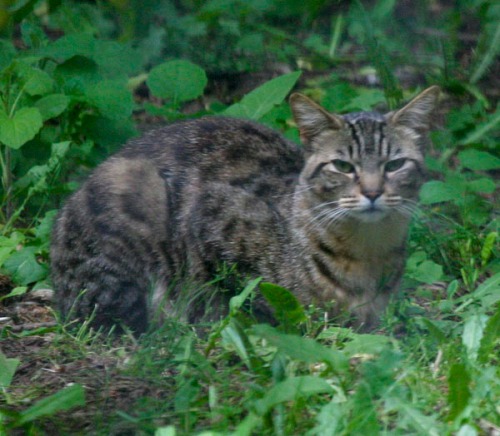 The true face of Spot.