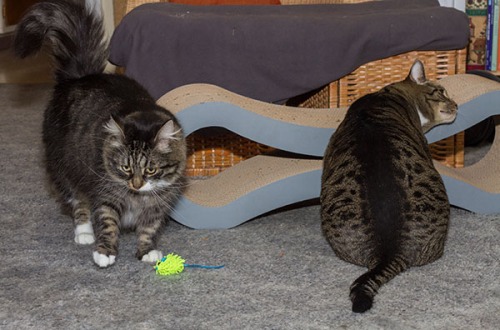 I declared that Brother Henry was right about the bench. Sir Thomas was upset because he thought that meant he was wrong.

END_OF_DOCUMENT_TOKEN_TO_BE_REPLACED

We Haven’t Forgotten About Valhalla

I just want you to know that we haven’t forgotten about Valahalla. We know Thomas is hiding something up there, and Brother Henry and I still intend to get to the bottom of it. I’ve even tried to sneak up there a couple times this past week, but each time I did I encountered Thomas on the stairs. He didn’t say a word. He just gave me this look:

This is the look Thomas gave me.

END_OF_DOCUMENT_TOKEN_TO_BE_REPLACED

Brother Oliver here. Yesterday we brought you Super Brush Sunday, the not-to-be-missed event of the year. We only had limited video from the event, but I was there with my still camera so I can now bring you the highlights! Let’s take a look!

END_OF_DOCUMENT_TOKEN_TO_BE_REPLACED

People and fur people who are Disciples of The Leader Otis,

It’s Thomas. The other day I looked at the cover of a magazine that one of the Guardians was reading. It was called “Scientific American”, and one of the stories listed on the cover was about something called “string theory”. I was kind of excited because I really love string, and I think new theories about string would be really fascinating. The Guardians must have been reading my mind when I was thinking about this because one of them pulled out a string and began to dangle it over my head!

The Guardians read my mind!

As I began batting at the string, I started to develop a string theory of my own. The theory was that string is really fun to play with! I would need to perform several more trials to determine whether or not this was true though.

I started to develop my own string theory, but I needed to perform more tests.

In the end, I decided that there was enough evidence to conclusively prove my string theory. To celebrate, I decided to declare today “String Theory Sunday”, and all kitties who wish to should do their own test trials to see for themselves whether or not my theory is correct. It’s all in the name of science!

Thomas Knew About the Wiener Dog

Brother Oliver here. After Brother Henry left to go find Thomas, I stayed behind to try to hide the wiener dog scratcher as I was asked. After several minutes passed though, I had to desert my post briefly to take care of some urgent business at the litter box. I’m ashamed to say I might have waited a little too long… Anyway when I returned to the living room I was shocked to find Thomas sitting on top of the wiener dog scratcher giving himself a bath! 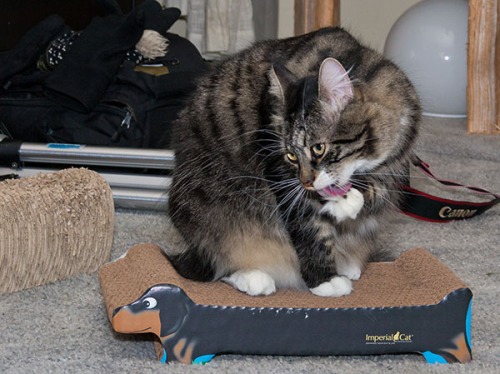 Sir Thomas was sitting on top of the wiener dog scratcher. He was bathing!

END_OF_DOCUMENT_TOKEN_TO_BE_REPLACED

The Luckiest Crow in the World

Brother Henry here. That crow would be mine. I would stalk him, and pounce on him, and crunch his birdie bones before he even knew what happened. I swear, I would do it. 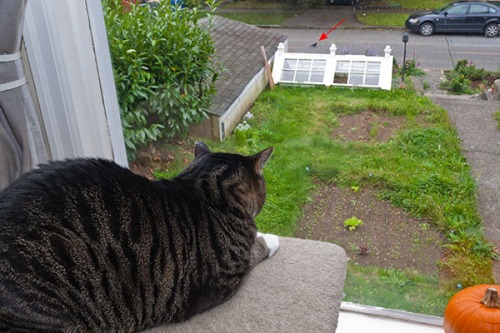 I would have you before you even knew what happened, crow…

END_OF_DOCUMENT_TOKEN_TO_BE_REPLACED

The votes are in and… well… Brother Henry is not very happy about the results. You see, of the 135 votes cast as of 10 am today, Brother Henry received only 5. He says it is a travesty, and it undermines the whole traditionalist Squatting Tiger movement. He was pouting all morning. 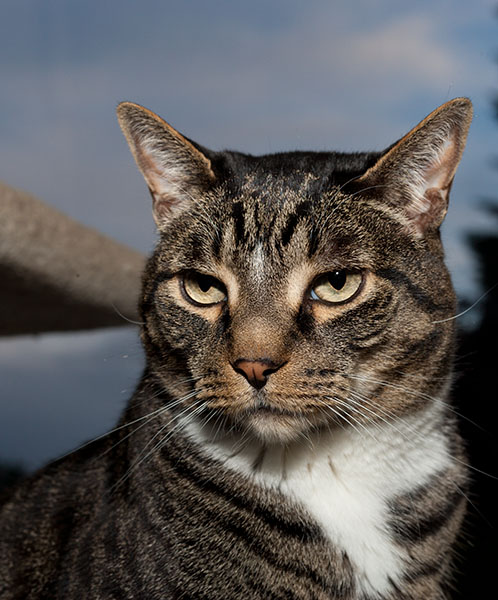 Brother Henry spent the morning pouting. He was not happy with the voting results.

END_OF_DOCUMENT_TOKEN_TO_BE_REPLACED

The time has come to cast your vote to decide which cat has the best take on the Squatting Tiger pose. Before we vote though, Brother  Henry has requested that I show a few photos of Myself performing Squatting Tiger back when I was still fully mobile. I think he just wanted me to do this because I mentioned that I used to agree with his traditionalist take on the pose, but when Mama Cat, Brother Oliver, and Thomas also expressed an interest, I decided to honor Brother Henry’s request. So, here are three photos of Me in all My Squatting Tiger glory back in 2011.

Brother Henry was excited when he saw this. He said, “See! Even The Leader squatted with his bum all the way on the ground!”

When Brother Oliver saw this one he said, “Uh-oh Brother Henry… it looks like his bum is up off the ground in this one.” Brother Henry disagreed, claiming you couldn’t tell from this angle. 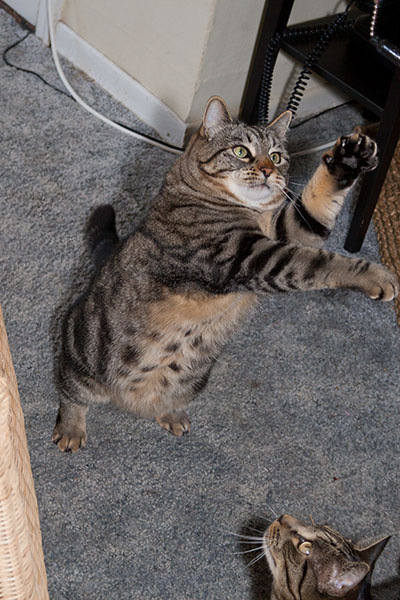 Brother Oliver got excited about this one too, but only because that’s him in the lower right corner.

Sadly, these photos did nothing but reignite the debate about who is right! Let’s get to it.

Cast your vote now and we will settle this once and for all.

So far this week we have seen four different takes on the proper way to perform a Squatting Tiger pose. We’ve also had our share of controversy due to the strong opinions of the kitties involved in this competition. Well, today it’s my turn to weigh in, and to be honest, I kind of agree with Sir Thomas. In the past, I might have taken a more traditionalist approach to the Squatting Tiger pose like Brother Henry has, but ever since I began to struggle with My mobility, I realized that not all kitties are physically able to perform a “perfect” pose. I mean, I can’t even squat anymore, but that doesn’t mean I can’t still channel My inner tiger. That being said, here is My modified take on the Squatting Tiger pose.

I can’t squat anymore, so I have to do My own version of Squatting Tiger. I think it should still be acceptable.

There you have it. I may not be squatting, but I’m still a tiger. What Brother Henry? You think I should call it the Boxed Bobcat pose? Hmmm… I actually kind of like that… Anyway, you now have five entries to peruse, My Disciples. Come back tomorrow and we will have the vote that settles this Squatting Tiger issue once and for all!

We have now seen three takes on the Squatting Tiger pose, but it’s time to add another kitty into the mix. Today, that kitty is Brother Oliver, and he contends that none of the poses we have seen so far were even close to accurate. Brother Oliver says that a squat is when your legs are bent, but your booty is still slightly off of the floor.  Therefore, Brother Henry, Sir Thomas, and Mama Cat were all actually sitting in their photos. He thinks that they should be disqualified for performing Sitting Tigers instead of Squatting Tigers. Here, in his opinion, is how a Squatting Tiger is actually performed:

Brother Oliver says that in a true Squatting Tiger, your booty is slightly up off the floor. Otherwise, it’s a Sitting Tiger.

Whoa! Calm down everyone! Sorry, My Disciples. Brother Oliver’s controversial statement about booty placement has caused an argument to break out among the contestants. I’ll try to calm them down. In the meanwhile, ruminate on Brother Oliver’s entry and we’ll be back tomorrow with My entry in this debate.

The Blog of Otis
Blog at WordPress.com.
Loading Comments...