Thomas’s Discovery Takes Us To DEFCAT 2

This morning I walked into the living room to find Brother Henry and Sir Thomas sitting up on the arm of the couch looking like they were on high alert. I overheard Thomas say, “I am telling you Brother Henry, I saw it with my own eyes! This thing could be the biggest threat to feline existence since the invention of the vacuum cleaner!” 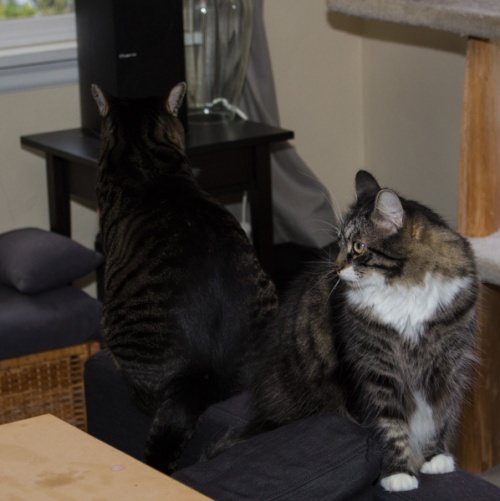 Sir Thomas told Brother H that he had discovered the biggest threat to feline existence since the vacuum cleaner.

I heard Brother Henry say, “We can’t jump to conclusions Sir Thomas. This may not be what you think it is. What if it really is just a device used for play?” Sir Thomas replied, “No Brother Henry, I am almost certain that there is more to this thing. You have not seen it yet so I understand your skepticism, but once you have seen it I think you will agree.” At that point my curiosity got the best of me and I said, “What are you guys talking about?” Sir Thomas and Brother Henry both turned to look at me. 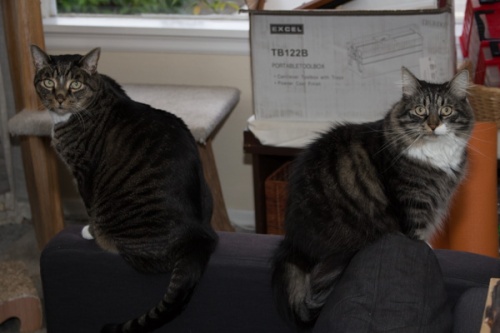 When I spoke, Sir T and Brother H both turned to look at me.

Brother Henry spoke first saying, “Sir Thomas has found a video online that has greatly disturbed him. He says that the Long-feared Dog Uprising…” Thomas quickly interrupted saying, “Long-feared Wiener Dog Uprising…” Brother Henry continued, “… is working on a new weapon delivery system. He says they are trying to trick the humans into thinking it is a harmless device meant for entertainment, but he says he sees right through that lie.” Quickly losing interest I said, “OK. You guys have fun.” And turned to walk away, but Thomas jumped down and blocked my path. He said, “Please, both of you, you have to watch this!” and then he went over to the computer, pawed a couple buttons, and a video began to play. Here is what we saw:

After watching the video Brother Henry and I were both speechless for several seconds. Thomas finally broke the silence saying, “You see now what we are up against, right? The dastardly wiener in the video is trying to convince us that this device was designed to launch tennis balls, but it could just as easily be used as a launch platform for pawtomic weapons!” Brother Henry and I both gasped, he because he believed what Thomas had just told him and I because the depths of Thomas’s paranoia about wiener dogs had just taken my breath away.

After gathering his wits Brother Henry said, “All right! I am officially taking us to DEFCAT 2! Sir Thomas, I am tasking you with doing the necessary research to develop a weapon that can counter this potential pawtomic threat! Brother Oliver, I need you to go and check on our supplies. If we are attacked with a pawtomic bomb we may need to stay inside for a very long time to wait for the radiation to subside…” I was about to protest until Brother Henry continued, “I want you to go around to all of the food bowls in the house and make sure they are well stocked! You both have your assignments, now get to it!” Sir Thomas and I shouted in unison, “Sir! Yes sir!”, and then ran off in opposite directions to do our duty.

As of this writing Sir Thomas had not yet reported back on his progress. I, however, did my duty as commanded… although Brother Henry was pretty disappointed when I informed him that every single food bowl in the house was empty. Now, if you’ll excuse me, I need to go lay down for a little while.

4 responses to “Thomas’s Discovery Takes Us To DEFCAT 2”