I declared that Brother Henry was right about the bench. Sir Thomas was upset because he thought that meant he was wrong.

I said, “No, Sir Thomas! You weren’t wrong at all! This is ‘The Bench of Infinite Wiener Vigilance’!” Climbing back up on the bench, Sir Thomas said, “Ummmm… I do not get it, Brother Oliver. How can the bench be all of these things?” 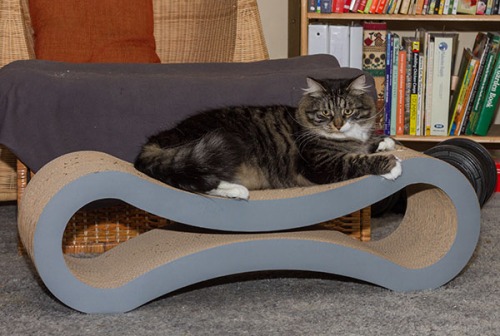 Sir Thomas climbed back up on the bench. He looked a little confused as he asked me how the bench could be more than one thing.

I replied, “Because, Sir Thomas, this is ‘The Bench of Infinite Possibilities’!” Brother Henry let out a celebratory yowl and said, “That’s it, Brother Oliver! You aren’t ‘The Brains’ of Cult of Otis for nothing!” He then headed off to the snack bowl to continue the celebration. I turned to Thomas who was now sitting on the bench with a very serious look on his face. I asked him what was wrong and he said, “If the wiener dogs get their hands on this magical bench, we are all doomed!”

Thomas was now concerned that the bench would fall into enemy paws.

Thinking quickly I said, “No, no, no, Sir Thomas. You don’t have to worry about that. The bench only offers endless possibilities for cats. As you pointed out, wiener dogs’ legs are too ridiculously stubby for them to be able to reach the top of the bench. The bench only activates when the user is sitting on top of it.” Sir Thomas breathed a sigh of relief and said, “Thank goodness for that…”, but as I headed off to join Brother Henry at the food bowl, the last thing I heard Sir Thomas say was, “… unless they are secretly working on a wiener trampoline!” I pretended I didn’t hear it. No way was I going to have that conversation.