The New Outdoor Domain Part I- We Venture Forth

It’s done!  The Guardians have finished My new Outdoor Domain!  They spent all day yesterday attaching wire to the wooden frame and making sure everything was secure.  Every time they took a break and came inside, I ran to the bedroom, jumped up on the bed and pretended that I was bringing up a hairball on their pillows.  I think this was a very effective motivator for them because they continued to work well past dark to finish!

My new Outdoor Domain is complete! I shall reward the Guardians by leaving their pillows hairball-free!

Even though The Brothers and I know that the Guardians will always keep us safe, Brother Henry insisted that we take every precaution as we made our first foray outside the back door and into My Outdoor Domain.  He  said that as My Muscle, he would be remiss in his duties if he just took it for granted that the Guardians had created a secure and safe area for Me without checking it out for himself.  “After all,” he argued, “the Guardians are humans and, unlike cats, humans make mistakes.”  I couldn’t argue with that logic, so I ordered The Brothers to go to Defcat 2, which is the second highest state of alert for kitties.  Brother Henry took over from there.

Brother Henry suddenly became very serious and shouted, “Alright Agent O!  We are at Defcat 2.  We are moving into unfamiliar, possibly hostile territory and we must protect The Leader at all costs.”  Oh, I should tell you that “Agent O” is Brother Oliver.  Brother Henry decided to let him help with security duties after I trained him in the Art of Sneaky and paw to paw combat.  Brother Henry continued saying, “Everyone follow my orders and we’ll get through this thing in one piece!  Now, approach the doorway and hold there until I give the signal to proceed!”  We moved as a single unit to the doorway and held as instructed.  Well…we held as instructed and also sniffed everything within reach of our noses which is what we assumed Brother Henry meant. 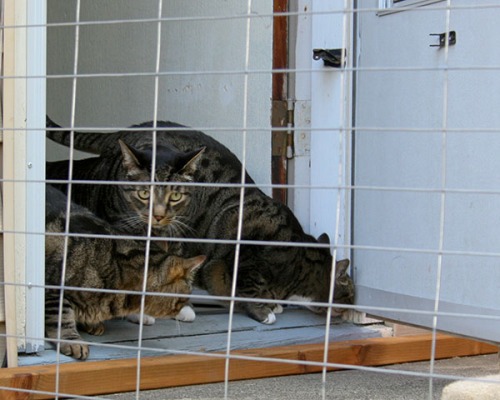 We held in the doorway as instructed, and sniffed as not specifically instructed but none-the-less assumed.

As Brother Oliver and I sniffed around the doorway, Brother Henry peered cautiously out into the new Outdoor Domain.  Suddenly he shouted, “Agent O!  Protect The Leader!”  He then bolted out of the door and ferociously attacked what appeared to be our scratching post from the living room.

With a shout to Agent O to "Protect The Leader!" Brother Henry bolted out of the door and attacked!

Brother Henry gave Brother Oliver and I the OK to proceed cautiously out of the doorway.  “Check those corners Agent O!  We don’t know what else might be out here!” he shouted. 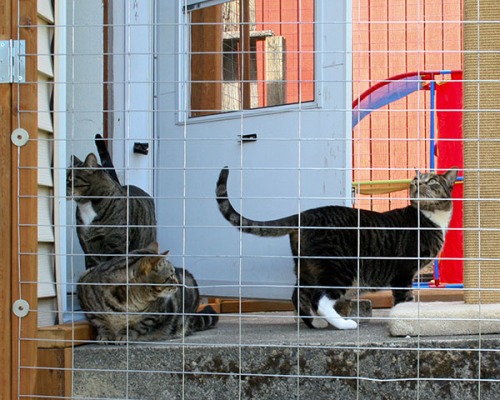 Brother Henry gave us the OK to proceed out of the doorway. He ordered Brother Oliver to "check those corners."

As Brother Oliver and I slowly moved out into My Outdoor Domain, Brother Henry exclaimed, “Oh my gosh!  There’s a deck over here!”  He was so surprised by the deck that his guard went down momentarily.  Brother Oliver was still following Brother Henry’s last order to “check those corners”, and for a split second I was left open to possible attack!

Brother Henry quickly realized his mistake and shouted out, “Agent O!  Assume defensive position Delta now!”  Brother Oliver reacted immediately, leaping in front of Me and using his body to screen Me from any potential danger.  He shouted, “We’re all clear back here sir!  Awaiting further orders!”  I turned to Brother Henry and shouted, “Give Me a status report on that deck soldier!  Am I clear to approach and possibly scratch it!?” 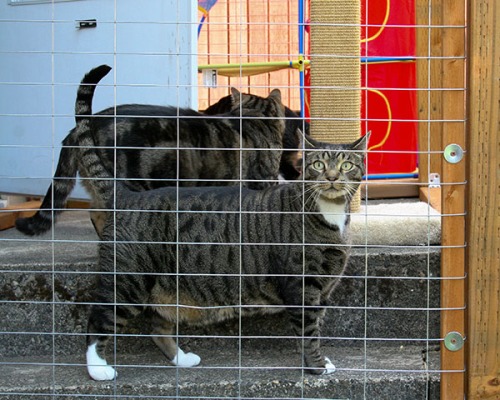 Brother Henry said that the deck appeared to be all clear.  He gave Me permission to proceed to the deck and ordered Brother Oliver to fall in behind to protect My rear as I advanced.  I made it to the deck without incident and proceeded to test its scratchability.

As I proceeded to the deck, Brother Oliver protected My rear.

I found the deck to have excellent scratchability.  It also extended past the corner of the house and I found I was able to look around that corner and see all the way to the front yard.  As an added bonus, the Guardians had placed My kitty jungle gym on the deck so I could lounge and/or climb if I so desired.  I was becoming more pleased by the moment, and I anxiously awaited the “all clear” from Brother Henry so I could start to relax and enjoy My new space.  But first, Brother Henry felt that there was some very important business to which we had to attend.